With a highly-anticipated product reveal, larger stand, and comprehensive display, Hino sent strong signals about its future in Australia at the 2017 Brisbane Truck Show. 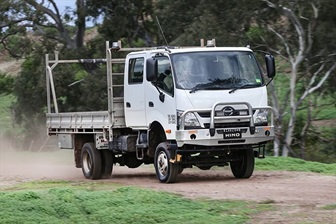 A highlight of the stand was a prototype version of the 300 Series 4x4, which was developed specifically for the Australian market and will be available in dealerships from the fourth quarter of 2017.

“In addition to revealing the 300 Series 4x4, the Show is also a platform for us to showcase the ongoing refinement of our brand and the continued evolution of our business.”

“At Hino Australia, we are not only a truck distributor, we are driven to do more for our customers.

“We want our customers to feel that we are a reliable business partner with whom they have a long-term partnership - this is demonstrated through the products and services present on our stand.”

Hino also exhibited three of the 50 plus variants of its new 500 Series Wide Cab medium duty trucks – the GH1835, FG1628 and FM2632 models - in what is the first major public display of the range.

As part of the ongoing evolution of its 500 Series range, Hino also announced additions to the transmission options for its Wide Crew Cab FG model, plus a new automatic choice for GT 4x4 customers.

In a further extension of its range, Hino will also offer an Allison 2500 series automatic transmission for its GT single cabin model, an option its GT crew cab customers already have.

Available in eight variants, the model displayed uses a 150HP (110kW) / 420Nm diesel engine in parallel with a 36kW / 333Nm electric motor which are both mated to a Hino ProShift 5 Automated Manual Transmission.

Another key model representing the popular 300 Series range was the 616 IFS Tipper, an example of the Hino ‘Built To Go’ range.

With class-leading standard safety features including vehicle stability control, dual SRS airbags, ABS and Anti Slip Regulator (ASR) , it boasts a 150HP (110kW) diesel engine with 420Nm of torque. It is able to be rated with either a car licence 4,495 kilogram GVM or 5,500 kilogram GVM for light truck licence operation.

The 700 Series heavy duty range was represented by a SH2045 which was mated up to the Hino Sports Deck display trailer, a popular attraction at the Virgin Australia Supercars Championship, which Hino is a passionate sponsor of.

Another key feature of the stand was a cinema-style sound-proof alcove where customers could learn more about Hino Telematics.

Developed in Australia and launched in late 2016, Hino Telematics is a key component of the Hino Advantage suite of business solutions.

It provides customers with detailed reporting on driver and vehicle performance, driver safety, fuel usage and the ability to monitor a whole fleet’s performance via an online portal.

Mr Gillespie positioned Hino Advantage as a key factor in the refinement of the brand:

“The Hino Advantage program allows us to continue our partnership and support of our customers business long after the truck is handed over.”